Before we go on our second-day tour, this Kuala Lumpur Transit Map helped us do our DIY tour.  So be sure to carry on with this.  Today's plan is to visit Batu Caves and Genting Highlands. 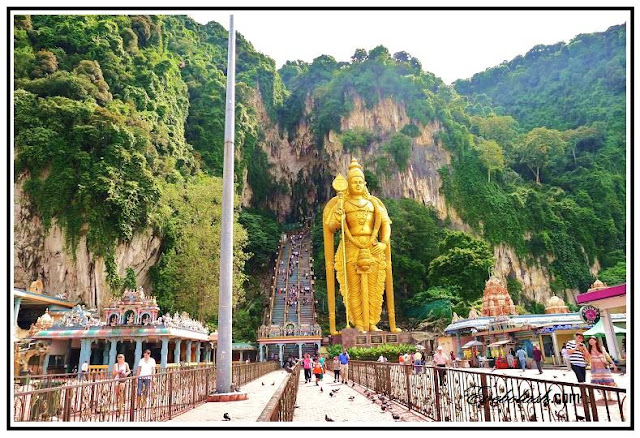 KL Monorail is just 5 to 10mins walk from the hotel.  So from Bukit Bintang station ticket price to Bukit Nanas which is 2 stations away cost MYR1.20. 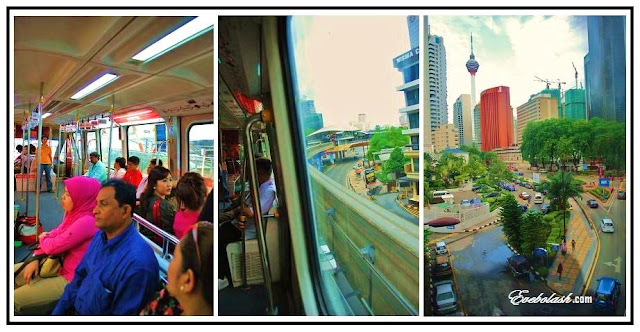 Then transfer to Kelana Jaya Line or Putra Line, which is at Dang Wangi station.  Just follow the signs that will lead you to another line, the good thing is the area is covered so you won’t get wet even if it rains. 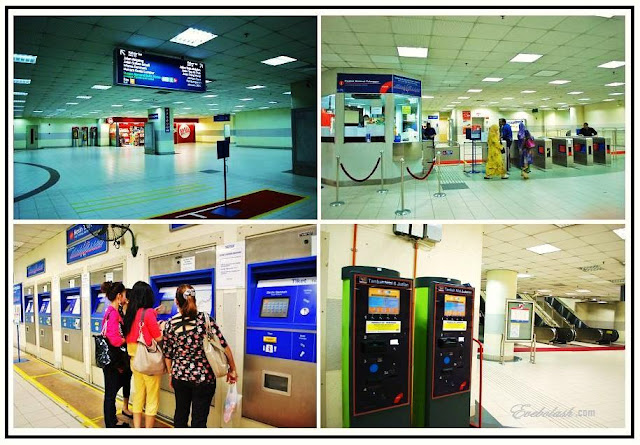 I am actually impressed with their trains and stations. 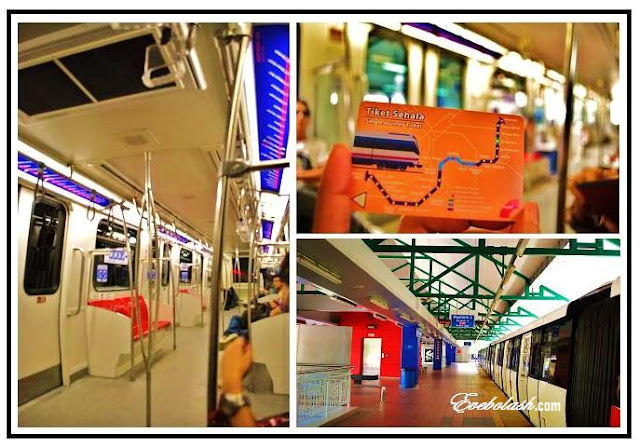 It is almost an hour when we reached the Putra Gombak Station.  The Go Genting Package Express booth is located on the left side when you exit the station.  We were on time as what we planned but the next available bus is too late from our sched.  I think there were number of tourists during our time.  So we didn’t avail the Go Genting package, instead we haggle with the taxi driver which is very “makulit” offering his service going to Batu Caves, another Chocolate Factory and straight to Genting Highlands for MYR18 per head.  The only regret we had was the buffet lunch at Coffee Terrace, which cost MYR53.

It took us 10 to 15 mins. To Caves which is part of the Gombak District.  It is
situated 13km north of the capital city .  The other way to
reach Caves is by commuter train from KL Sentral Station. 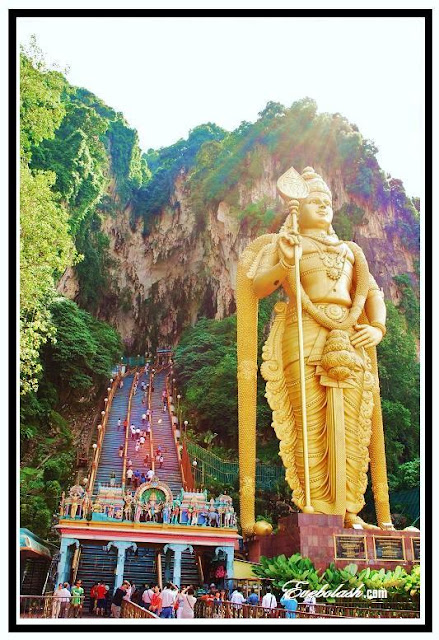 The limestone forming Batu is said to be around 400 million years old.  It has a
series of caves and caves temples and promoted as a place of worship, the sacred place
for Hindus in Malaysia. 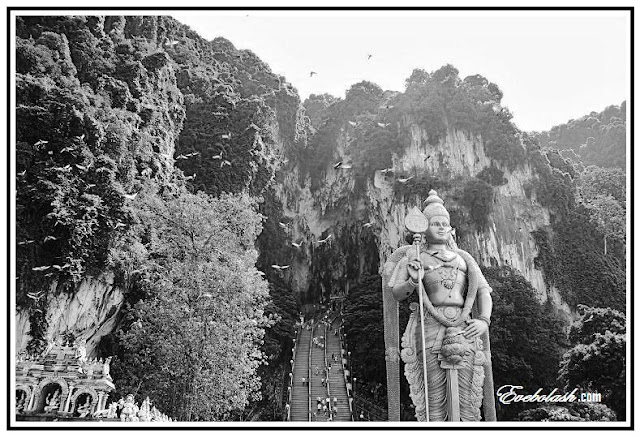 Batu serves as the focus of the Hindu community's yearly Thaipusam festival
which was held mostly end of January.  It has become a pilgrimage site for not only


Malaysian Hindus, but Hindus worldwide from countries such as ,  and . 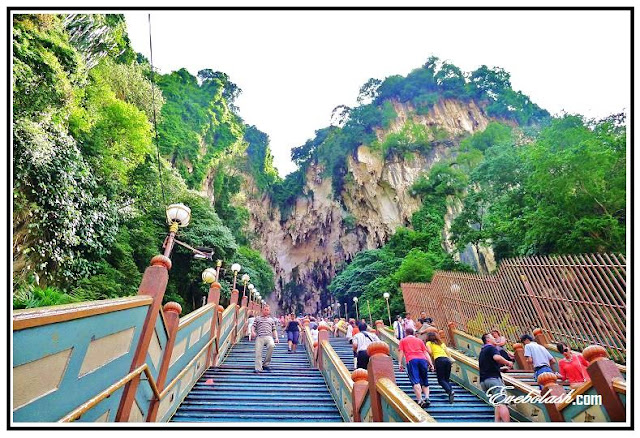 With enervating 272 steps climb on a steep flight stair before you reach it.   Be ready also to meet a lot of long tailed-macaque monkeys so be careful with your belongings as some of them are grabbing things they like so I guess to better have some peanuts or bananas to offer rather than your things.

No, we didn’t climb as we’re running out of time.  We’re contented to have our picture taken outside. 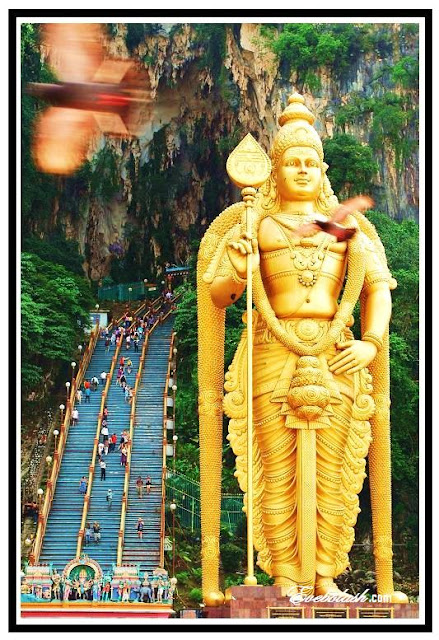 The statue of Lord Murugan is considered World’s tallest statue of Murugan, a Hindu deity standing at 42.7m high was one of the most popular tourist destinations in Malaysia.  Approximately, it cost 24million rupees, which is made of 1550 cubic meters of concrete.  250 tonnes of steel bars and 300 litres of gold acquired from its neighbour country Thailand to paint the statue. 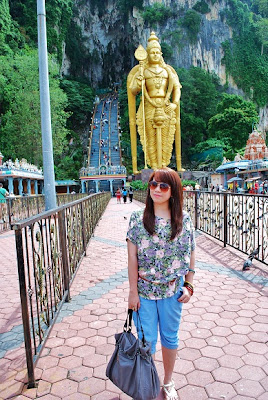 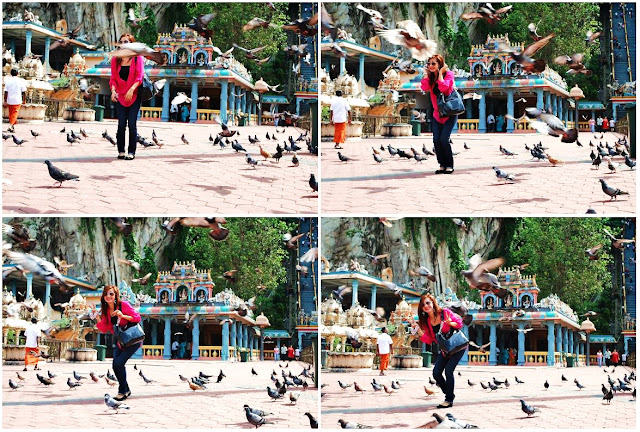 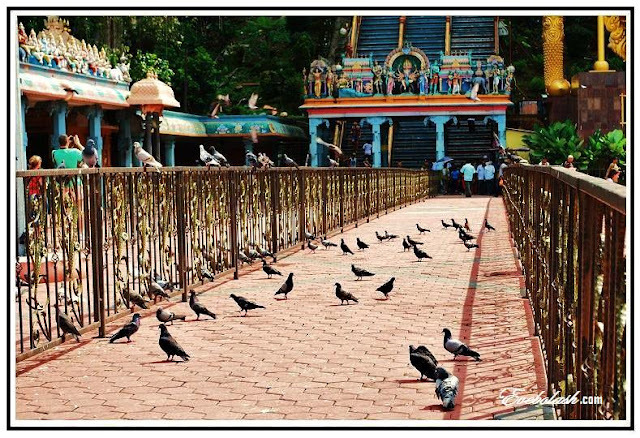 We enjoyed taking photos with these lovely pigeons before we set off to Genting Highlands.